Here is an incomplete, but hopefully useful, photo walkthrough of a simple round basket.

Creating the slath with 8 sticks. In the close up you can see the first thin ends inserted to start pairing around the slath. 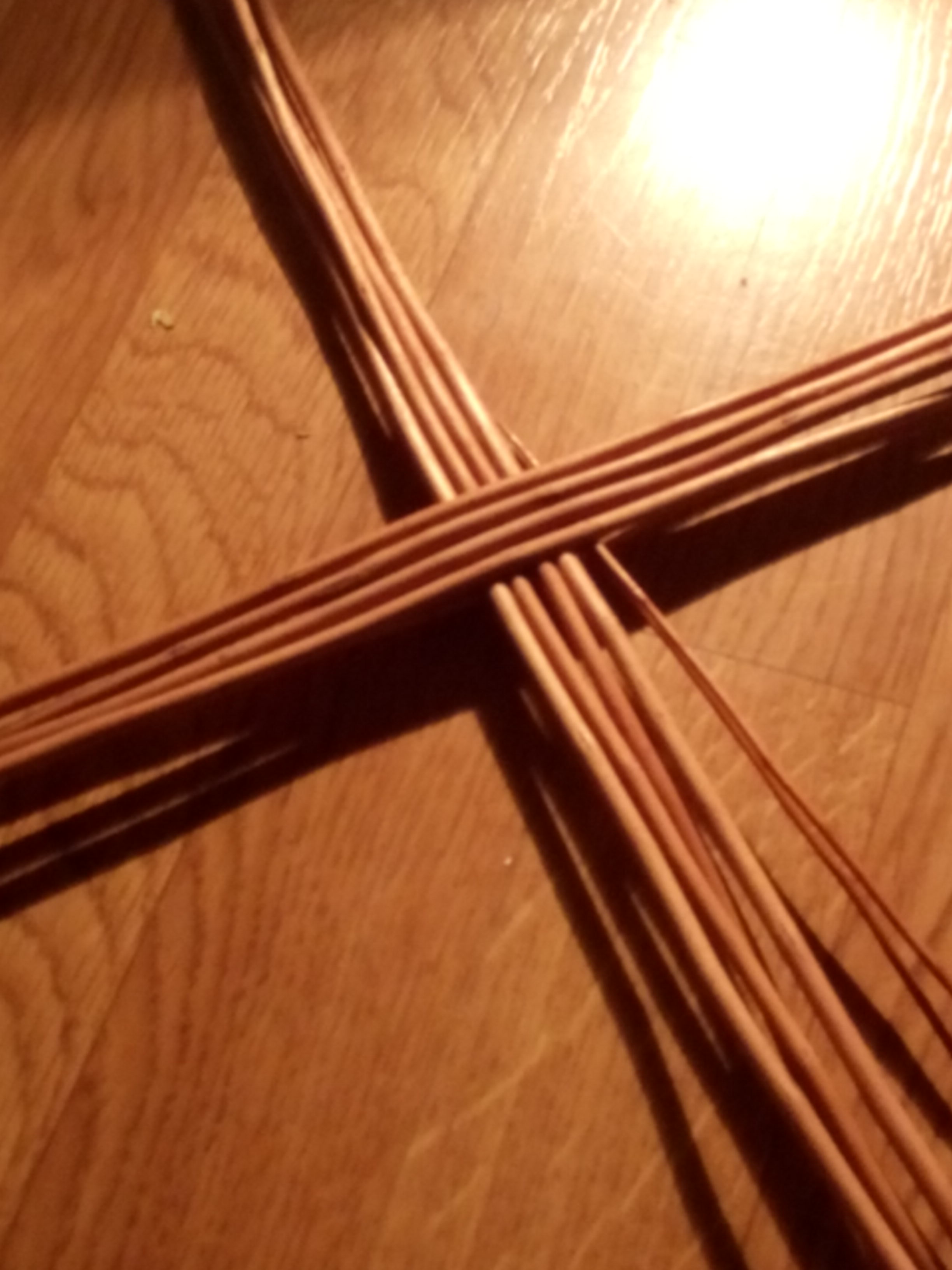 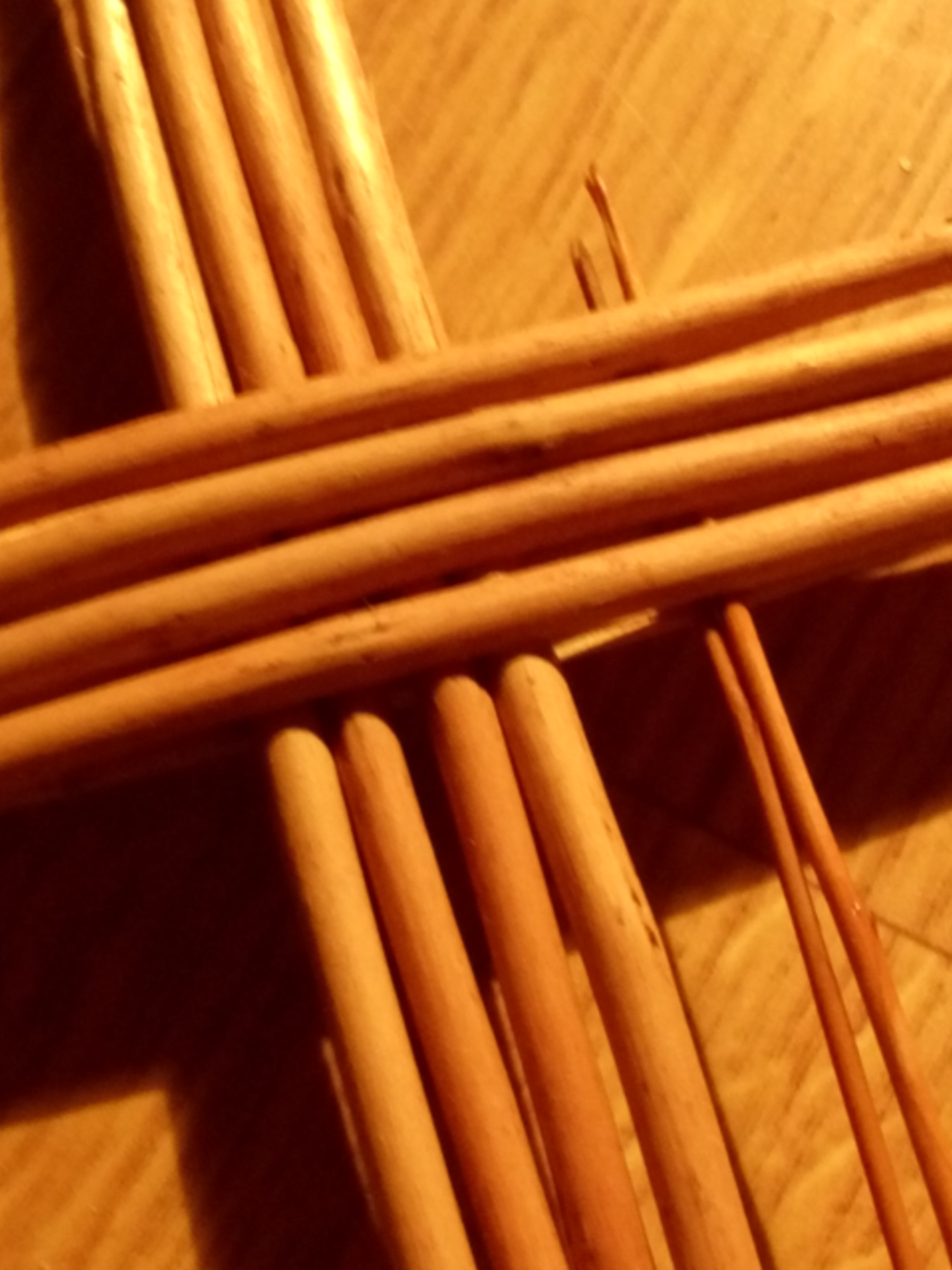 This is after a few rounds of pairing. You can certainly get a tighter base than this! 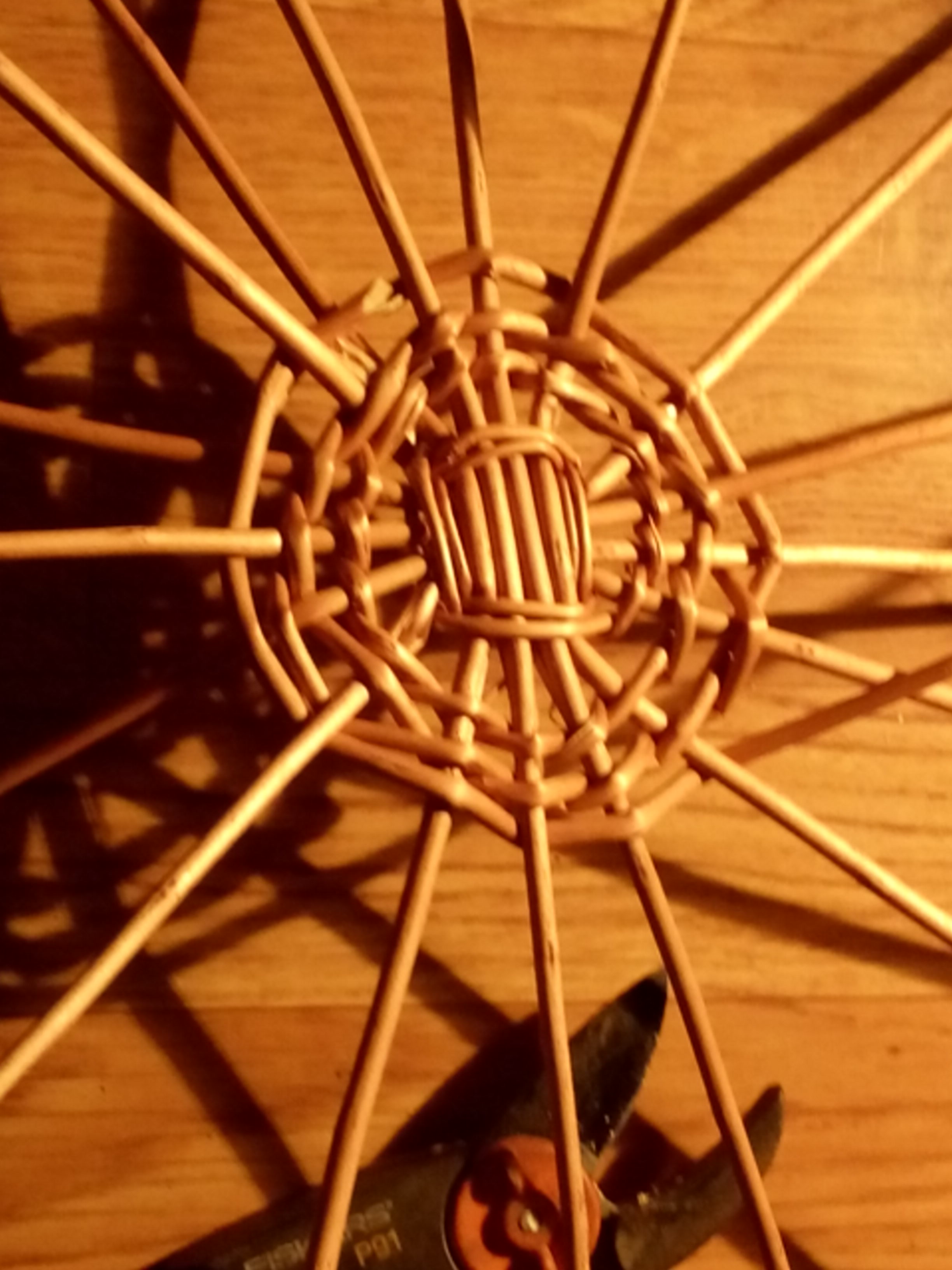 Then building up the base with a plain weave – an extra spoke has been added in the south-west corner of the picture to make an odd number (17) of spokes so that the plain weave works. This was, I think, my first basket, so there are some glaring mistakes in this base! 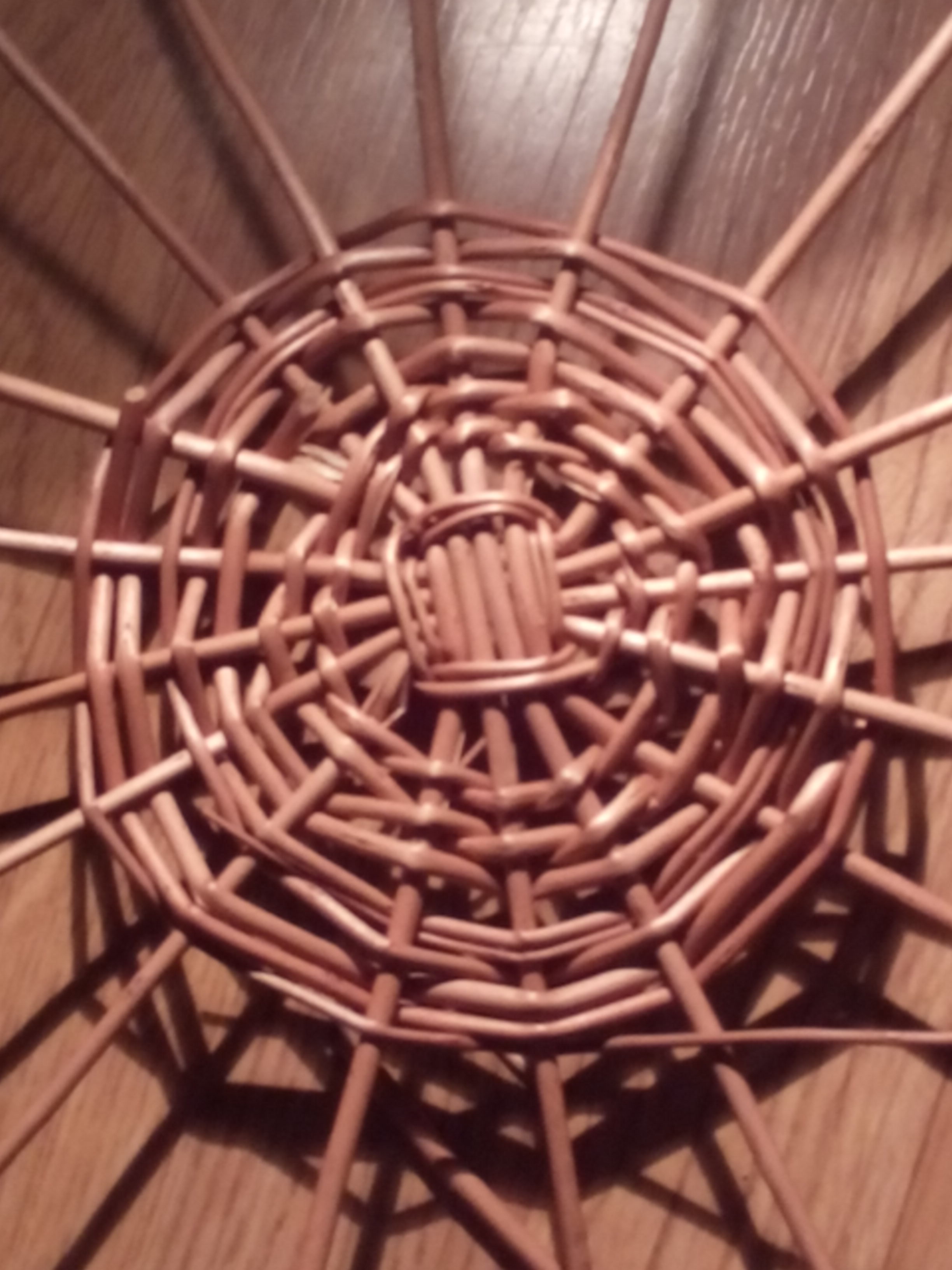 New stakes are added alongside each spoke, and the spokes cut off flush with the base; the basket can then be staked up. A rim is creating by taking each stake to the left, beneath the next two adjacent stakes before bending up. Coming to the last two stakes, they will need to be taken to the left, and threaded through the rim as if they were going under the next two – the first two stakes you bent up. Once this rim has been made, a three-rod wale is woven, which keeps the stakes in place. 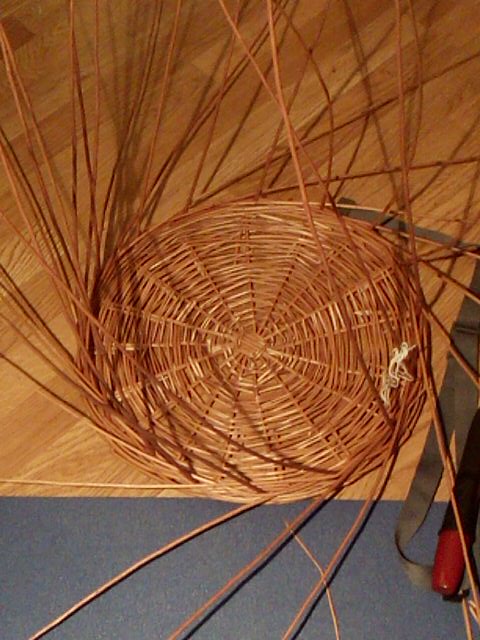 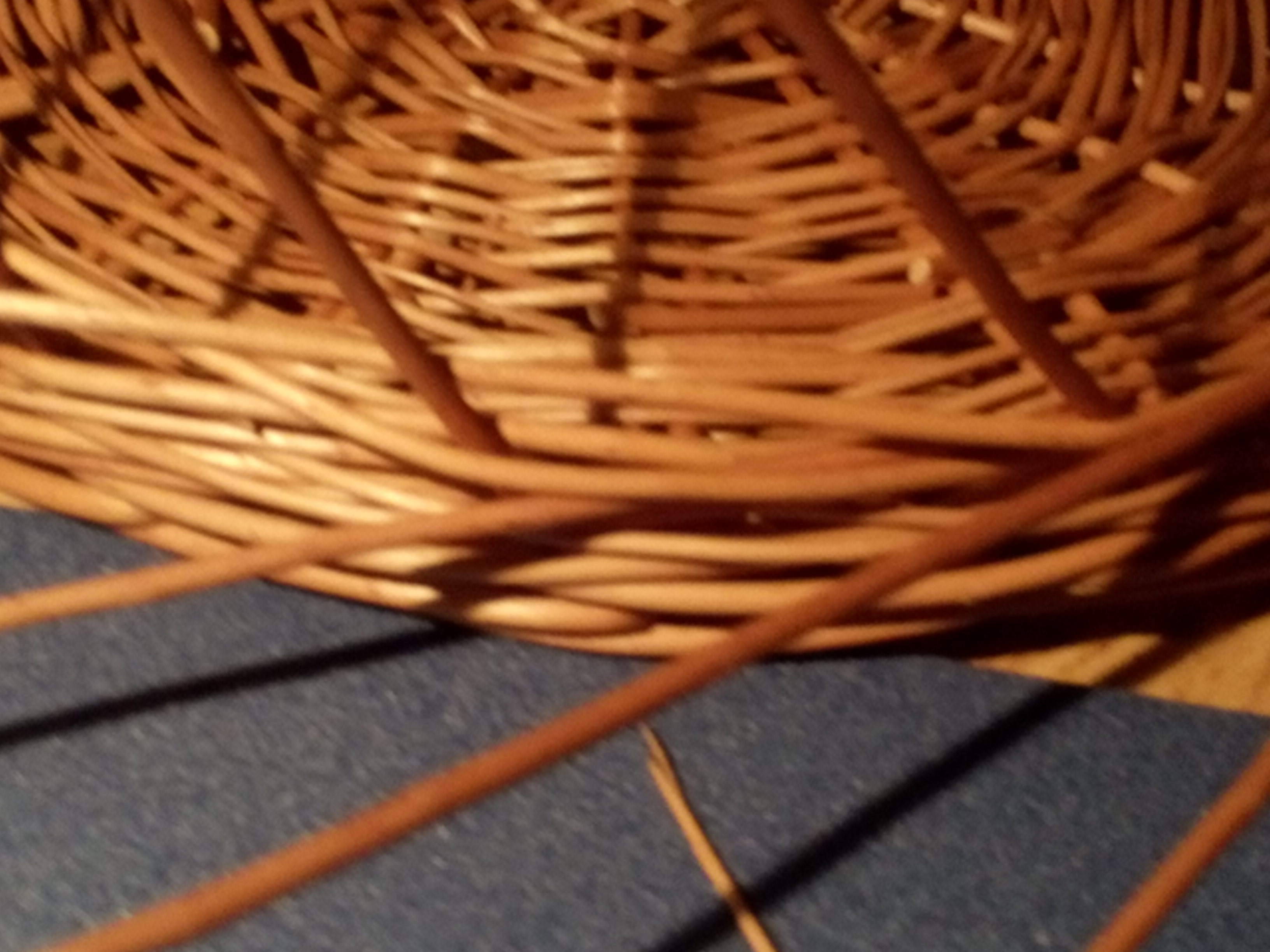 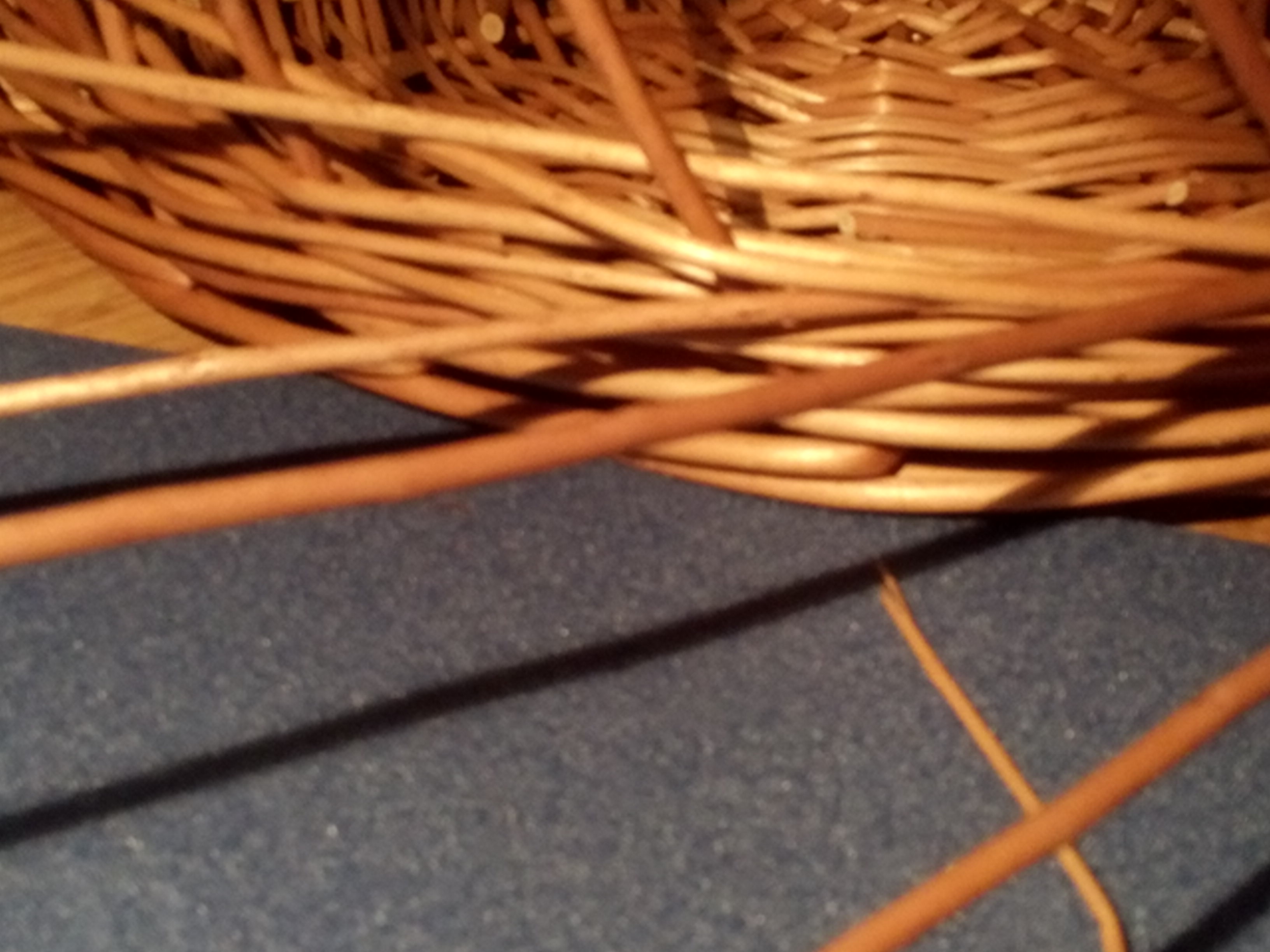 We can now start to build up the sides using French randing. Placing a the end of a weaver behind an upright stake; take the weaver over the next stake to the left, behind the next one, and then our again. Working to the right, add weavers all the way around the basket (the last two will need to be added underneath the first weavers laid in). Then, starting with any weaver, a basic weave can be started: taking any weaver, weave it in and out once, then take the next to the right and work around the basket. When you return to the beginning, weave the lower of the pairs of weavers that are sitting together first, and you will be back to your starting point. 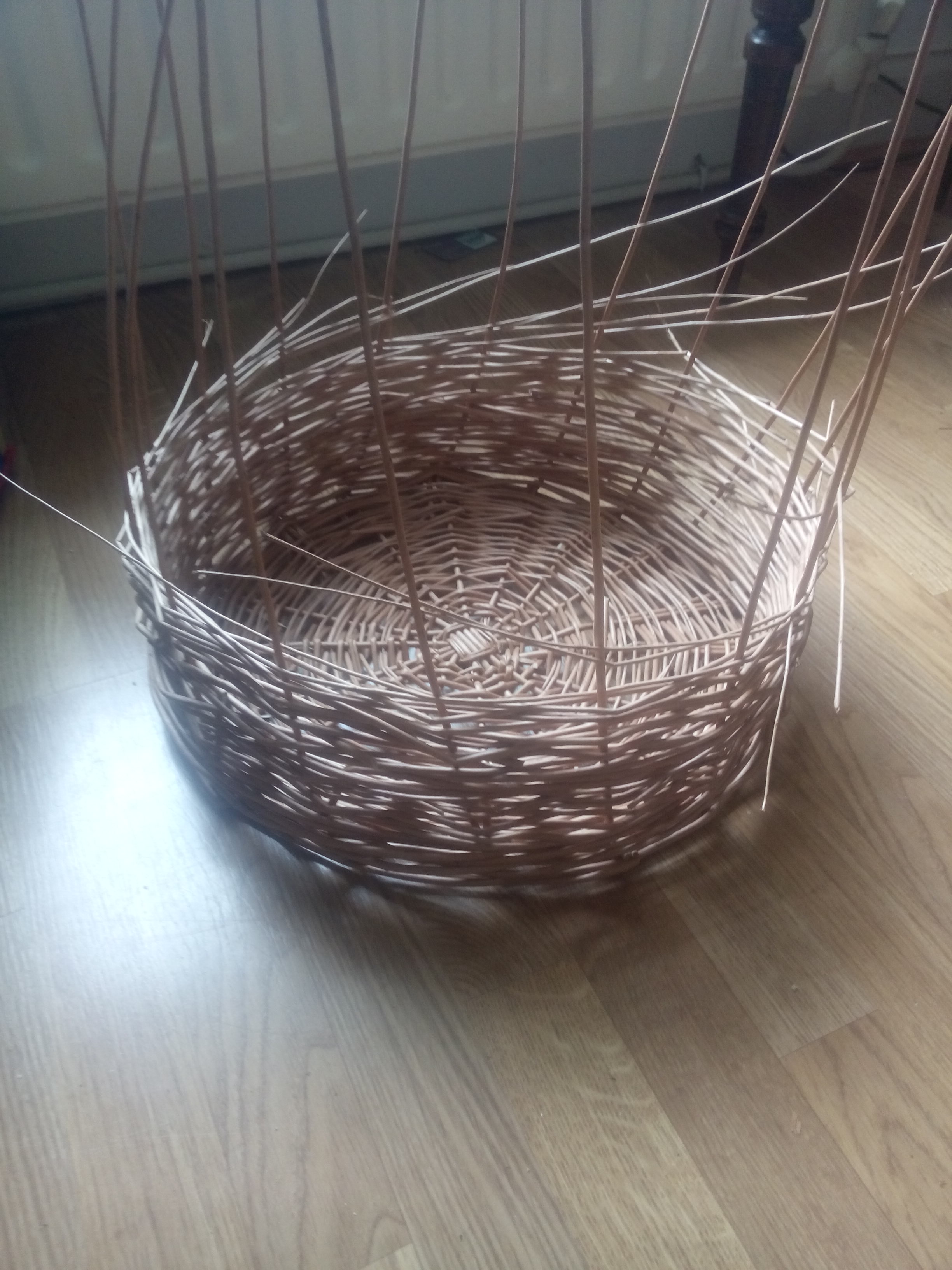 Once the sides are high enough, use three thick rods to weave a three-rod wale to lock down the basket sides.

Then you can weave a rim. Make sure the upright stakes are still wet enough to bend down or they will crack at this point. A simple rim pattern is to bend each stake down to the right, behind two stakes, in front of the third, behind the fourth, then out to the front. Continue around to the right, weaving the last stakes in the same pattern through the rim.

Here is a completed basket, with a rod from a lime sucker inserted to make a hooped handle. 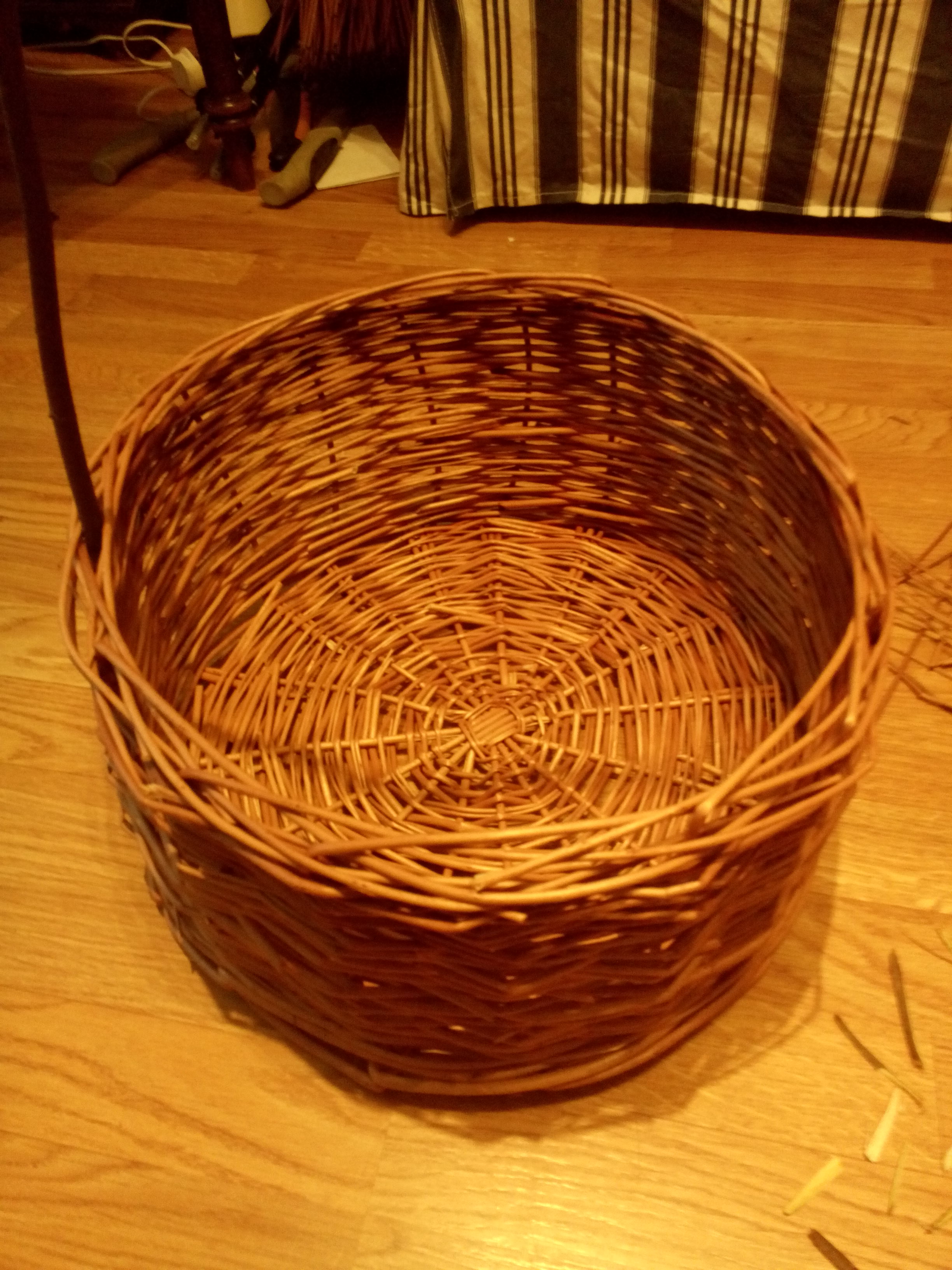 The rod is bent over and inserted down into the weave – sharpen the end before doing this. 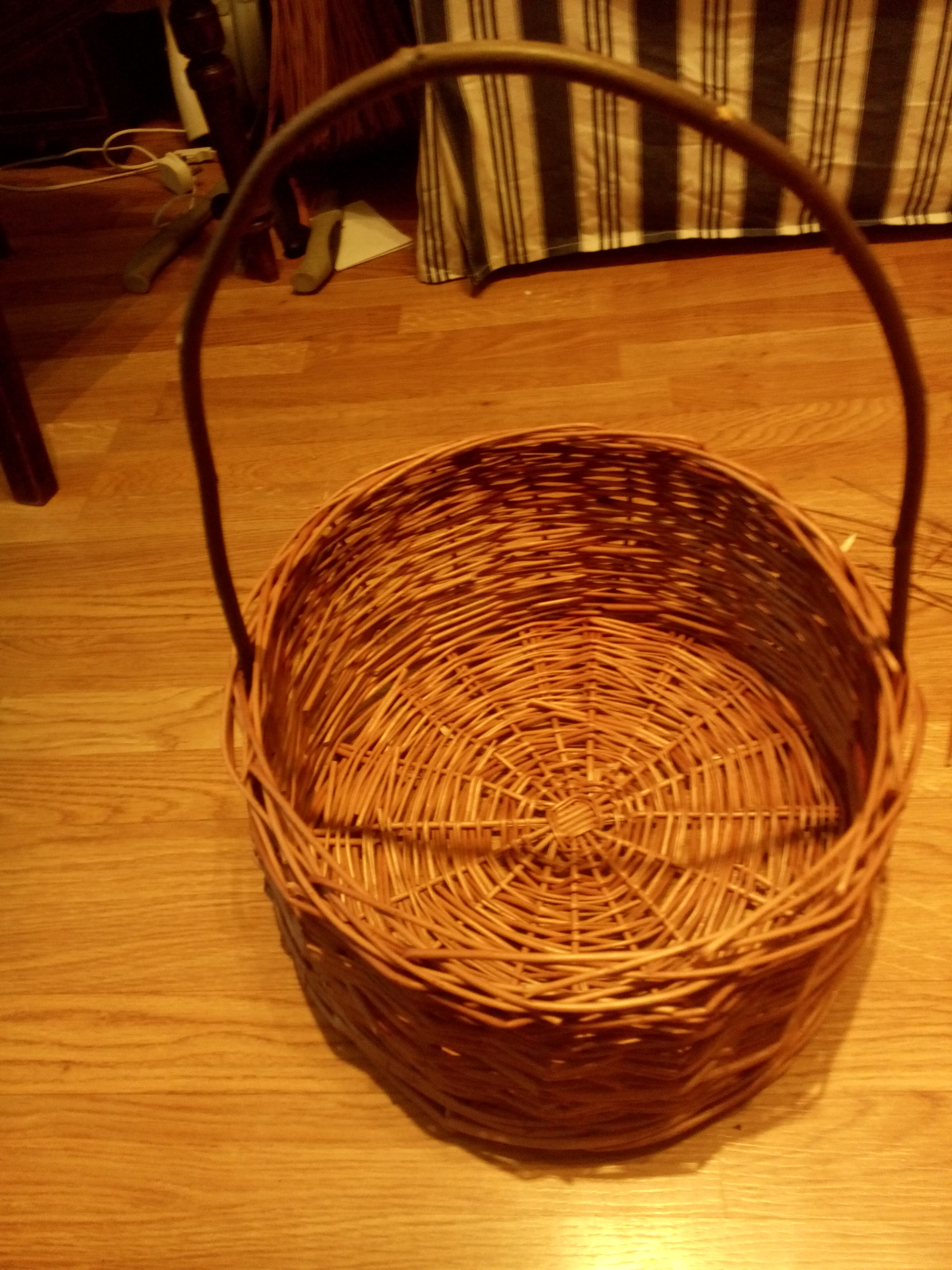 Then the handle can be wound with willow, normally working with two sets, one wound from each side. These three ohotos show the first set of 5 willow rods being wound around, and then under the rim; the tips are then bent up. 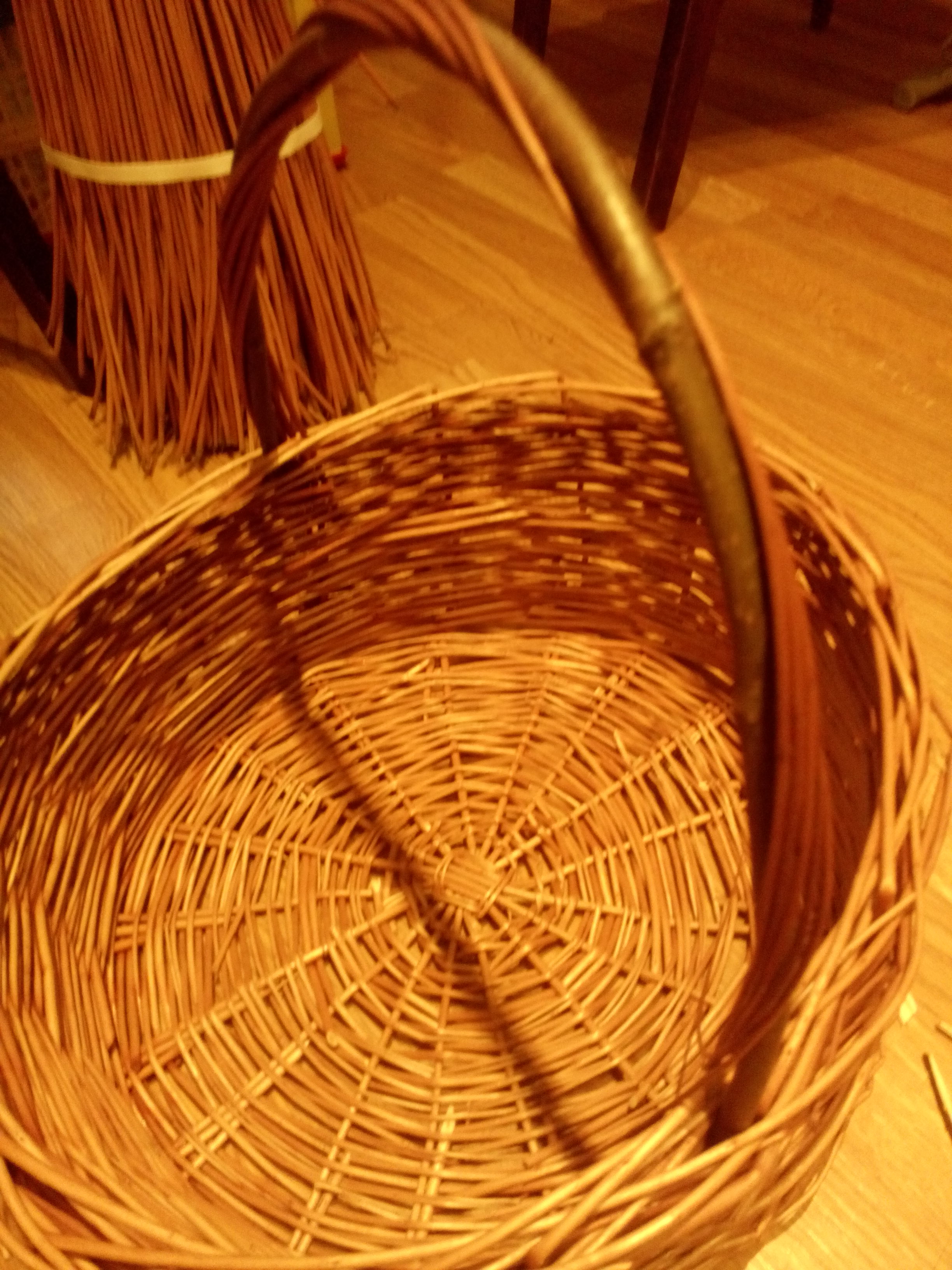 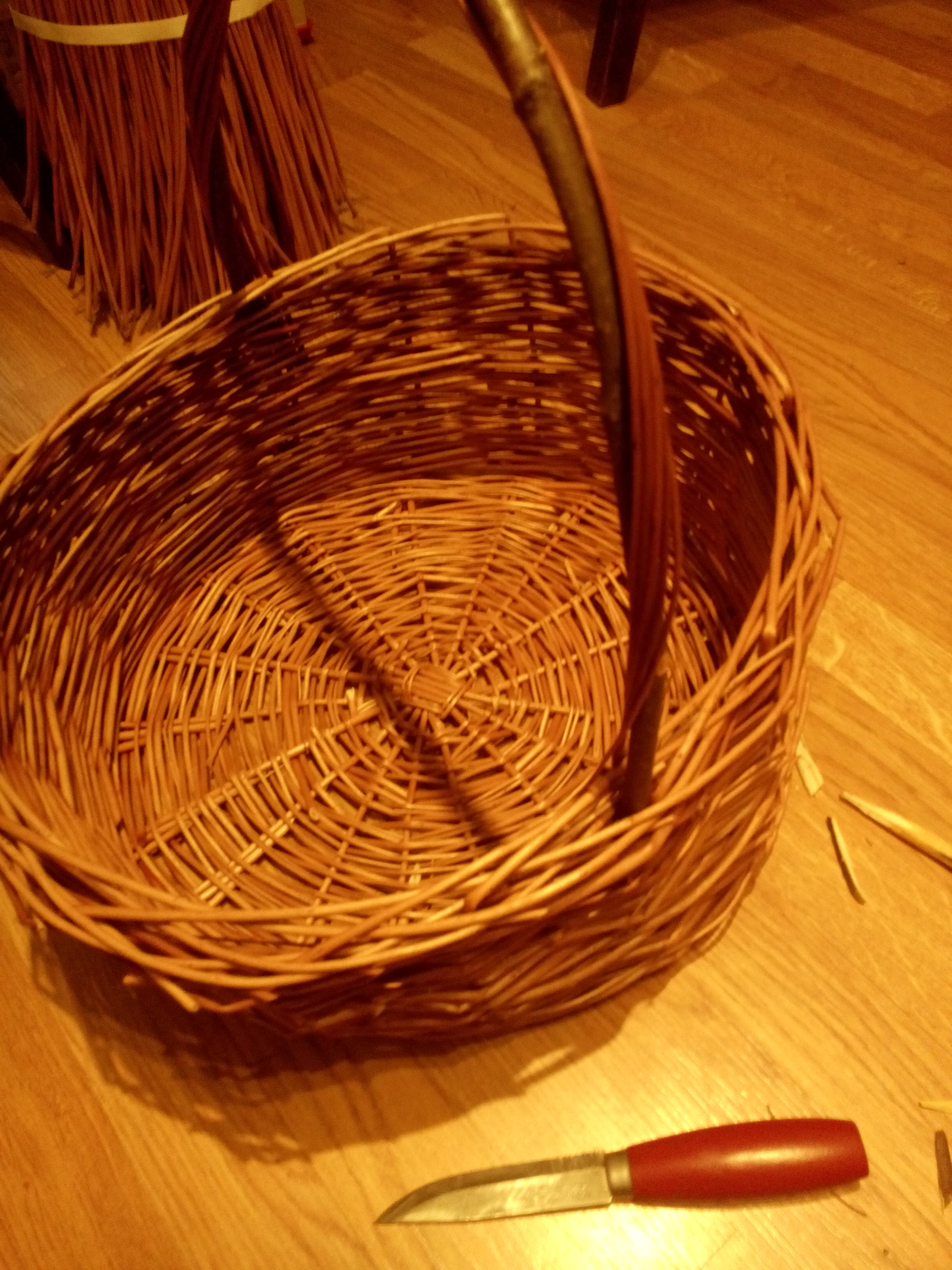 The second set are wound starting from the opposite side to the first set. The tips are then tied up against the handle using a thin weaver inserted first down into the basket weave. 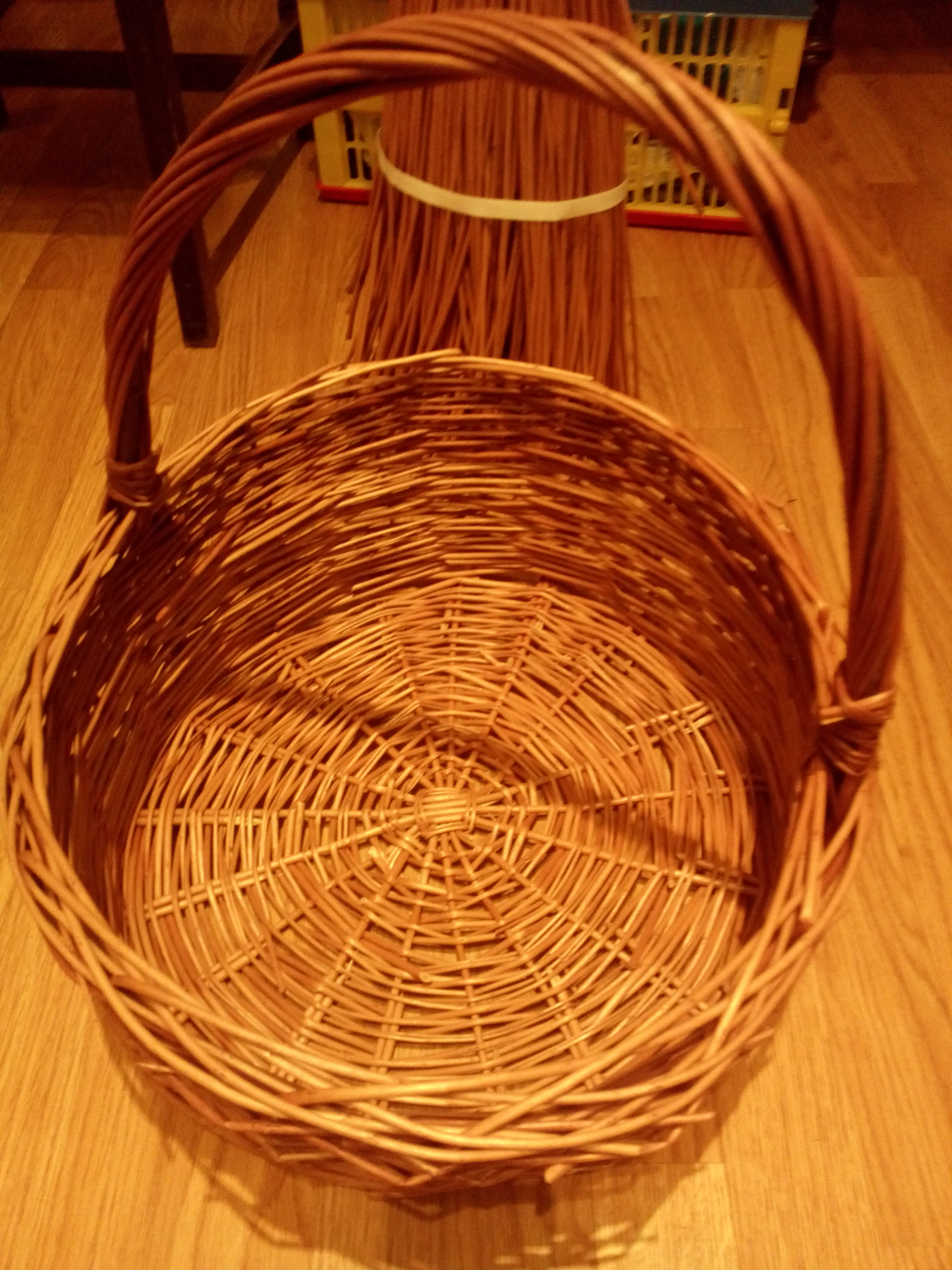